Steven John “Steve” Carell (/k?‘r?l/; born August 16, 1962) is an American actor, comedian, director, producer and writer. After a five-year stint on The Daily Show with Jon Stewart, Carell found greater fame for playing Michael Scott on the American version of The Office, on which he also worked as an occasional writer and director. He has also starred in lead roles in the films The 40-Year-Old Virgin (2005), Get Smart (2008), Crazy, Stupid, Love (2011), The Incredible Burt Wonderstone and The Way, Way Back (both 2013). Carell has also voiced characters in the animated films Over the Hedge (2006), Horton Hears a Who! (2008), Despicable Me (2010) and Despicable Me 2 (2013). Carell was nominated as “America’s funniest man” in Life magazine, and received a Golden Globe Award Best Actor in a Television Series for his work on The Office.

His dramatic role as wrestling coach and convicted murderer John EleuthÃ¨re du Pont in the 2014 film Foxcatcher earned him several awards and nominations including a nomination for the Academy Award for Best Actor. Carell also received acclaim for his roles in the comedy-dramas Little Miss Sunshine in 2006, and The Big Short in 2015, for which he was nominated for a Golden Globe.

The youngest of four brothers, Carell was born at Emerson Hospital in Concord, Massachusetts, and raised in nearby Acton, Massachusetts. His father, Edwin A. Carell, was an electrical engineer, and his mother, Harriet T. (nÃ©e Koch), was a psychiatric nurse. His maternal uncle, Stanley Koch, worked with scientist Allen B. DuMont to create cathode ray tubes. Carell is of Italian (from his paternal grandfather), German, and Polish descent. His father was born under the surname “Caroselli”, and later adapted it to “Carell”. Carell was raised Roman Catholic, and was educated at Nashoba Brooks School, The Fenn School, and Middlesex School. Carell also played ice hockey and lacrosse while in high school. Carell played the fife, performing with other members of his family, and later joined a reenacting group portraying the 10th (North Lincoln) Regiment of Foot. Carell attributed his interest in history to this, earning a degree in the subject from Denison University in Granville, Ohio in 1984. While at Denison, Carell was a member of Burpee’s Seedy Theatrical Company, a student-run improvisational comedy troupe, and was a goalie on Big Red hockey team for four years. Carell also spent time as a disc jockey under the name “Sapphire Steve Carell” at WDUB, the campus radio station.

Carell states that he worked as a mail carrier in Littleton, Massachusetts. He later recounted that he quit after six months because his boss told him he was not very good as a mail carrier and needed to be faster. Early in his performing career, Carell acted on the stage in a touring children’s theater company, later in the comedy musical, Knat Scatt Private Eye and in a television commercial for Brown’s Chicken in 1989. After that, Carell performed with Chicago troupe The Second City where Stephen Colbert was his understudy for a time in 1991, the same year he made his film debut in a minor role as Tesio in Curly Sue. In spring 1996, he was a cast member of The Dana Carvey Show, a small, short-lived sketch comedy program on ABC. Along with fellow cast member Stephen Colbert, Carell provided the voice of Gary, half of The Ambiguously Gay Duo, the Robert Smigel-produced animated short which continued on Saturday Night Live later that year. While the program lasted only seven episodes, The Dana Carvey Show has since been credited with forging Carell’s career. During that time, he also played a supporting character for several series including Come to Papa and the short-lived 1997 Tim Curry situation comedy Over the Top. He has made numerous guest appearances, including on an episode of Just Shoot Me! titled “Funny Girl.” Carell’s other early screen credits includes Julia Louis-Dreyfus’s short-lived situation comedy Watching Ellie (2002-2003) and Woody Allen’s Melinda and Melinda. Carell was a correspondent for The Daily Show from 1999 until 2005, with a number of regular segments including “Even Stevphen” with Stephen Colbert and on the Daily Show.

During 2005, Carell signed a deal with NBC to star in The Office, a mockumentary about life at a mid-sized paper supply company, which was a remake of a successful British TV series. He played the role of Michael Scott, the idiosyncratic regional manager of Dunder Mifflin Inc, in Scranton, Pennsylvania. Although the first season of the adaptation suffered mediocre ratings, NBC renewed it for another season due to the anticipated success of Carell’s film The 40-Year-Old Virgin, and the series subsequently became a ratings success. Carell won a Golden Globe Award and Television Critics Association Award during 2006 for his Office role. He also received six Primetime Emmy Award nominations for his work in the series (2006-2011). Carell earned approximately US$175,000 per episode of the third season of The Office, twice his salary for the previous two seasons. In an Entertainment Weekly interview, he commented on his salary, saying, “You don’t want people to think you’re a pampered jerk. Salaries can be ridiculous. On the other hand, a lot of people are making a lot of money off of these shows.” Carell was allowed “flex time” during filming to work on theatrical films. Carell worked on Evan Almighty during a production hiatus during the second season of The Office. Production ended during the middle of the fourth season of The Office because of Carell’s and others’ refusal to cross the picket line of the 2007 Writers Guild of America strike. Carell, a WGA member, has written two episodes of The Office: “Casino Night” and “Survivor Man”. Both episodes were praised, and Carell won a Writers Guild of America Award for “Casino Night”. On April 29, 2010, Carell stated he would be leaving the show when his contract expired at the conclusion of the 2010-2011 season because he wanted to focus on his film career. His last episode as a main character, “Goodbye, Michael”, aired April 28, 2011 with his final shot showing Carell walking to a Colorado-bound plane to join his fiancÃ©e, Holly Flax, in Boulder, Colorado. Although he was invited back for the series finale in 2013, Carell originally declined believing that it would go against his character’s arc. Ultimately in the final version of the finale Carell reprised the role.

Carell’s first major film role was as weatherman Brick Tamland in the 2004 hit comedy Anchorman: The Legend of Ron Burgundy. Struck by Carell’s performance in the film, Anchorman producer Judd Apatow approached Carell about creating a film together, and Carell told him about an idea he had had involving a middle-aged man who is still a virgin. The result was the 2005 film The 40-Year-Old Virgin, which Carell and Apatow developed and wrote together, starring Carell as the title character. The film made $109 million in domestic box office sales and established him as a leading man. It also earned Carell an MTV Movie Award for Best Comedic Performance and a WGA Award nomination, along with Apatow, for Best Original Screenplay.

Carell played Uncle Arthur, imitating the camp mannerisms of Paul Lynde’s original character, in Bewitched, a TV adaptation co-starring Nicole Kidman and Will Ferrell. He also voiced Hammy the Squirrel in the 2006 computer-animated film, Over the Hedge and Ned McDodd, the mayor of Whoville, in the 2008 animated film Horton Hears a Who!. He starred in Little Miss Sunshine during 2006, as Uncle Frank.

His work in the films Anchorman, The 40-Year-Old Virgin, and Bewitched established Carell as a member of Hollywood’s so-called “Frat Pack”, a group of actors who often appear in films together, that also includes Owen Wilson, Will Ferrell, Vince Vaughn and Luke Wilson. Carell acted as the title character of Evan Almighty, a sequel to Bruce Almighty, reprising his role as Evan Baxter, now a U.S. Congressman. The film received mostly negative reviews. Carell starred in the 2007 film Dan in Real Life, co-starring Dane Cook and Juliette Binoche.

Carell played Maxwell Smart in the 2008 film Get Smart, an adaptation of the TV series starring Don Adams. It was successful, grossing over $200 million worldwide. During 2007, Carell was invited to join the Academy of Motion Picture Arts and Sciences. Carell starred with Tina Fey in Date Night during late 2008 and was released on April 9, 2010 in the U.S. He voiced Gru, the main character in the Universal CGI film, Despicable Me along with Russell Brand, Miranda Cosgrove, and Kristen Wiig, The film was Carell’s other 2010 film. He reprised the role in the 2013 sequel Despicable Me 2. He has several other projects in the works, including a remake of the 1967 Peter Sellers film The Bobo. He is currently doing voice-over work in commercials for Wrigley’s Extra gum. Carell has launched a television division of his Carousel Prods., which has contracted a three-year overall deal with Universal Media Studios, the studio behind his NBC comedy series. Thom Hinkle and Campbell Smith of North South Prods., former producers on Comedy Central’s The Daily Show, were hired to manage Carousel’s TV operations.

Carell played millionaire E.I. du Pont family heir and convicted murderer John EleuthÃ¨re du Pont in the 2014 true crime drama film Foxcatcher. Since the film’s premiere at the Cannes Film Festival, it has received widespread acclaim and Carell was nominated for the Golden Globe Award for Best Actor in a Motion Picture – Drama and for the Academy Award for Best Actor, both of which he lost to Eddie Redmayne.

Carell played activist Steven Goldstein in the gay rights drama Freeheld, replacing Zach Galifianakis, who dropped out due to scheduling conflicts. The film co-stars Julianne Moore, Ellen Page and Michael Shannon, and was released in October 2015. He followed this with another biographical drama, The Big Short, in which he portrayed banker Steve Eisman, whose name was changed in the film to Mark Baum. Directed by Adam McKay, the film stars Christian Bale, Ryan Gosling and Brad Pitt, and it was released in December 2015, The film also received widespread critical acclaim, earning Carell a Golden Globe Award nomination for Best Actor. The film was also nominated for the Academy Award for Best Picture, making it the second film starring Carell to be nominated for the award, with Little Miss Sunshine being the first.

He will next be seen in the Woody Allen comedy CafÃ© Society, alongside Kristen Stewart and Jesse Eisenberg, and in the biographical comedy-drama Battle of the Sexes, portraying tennis star Bobby Riggs opposite Emma Stone as Billie Jean King. 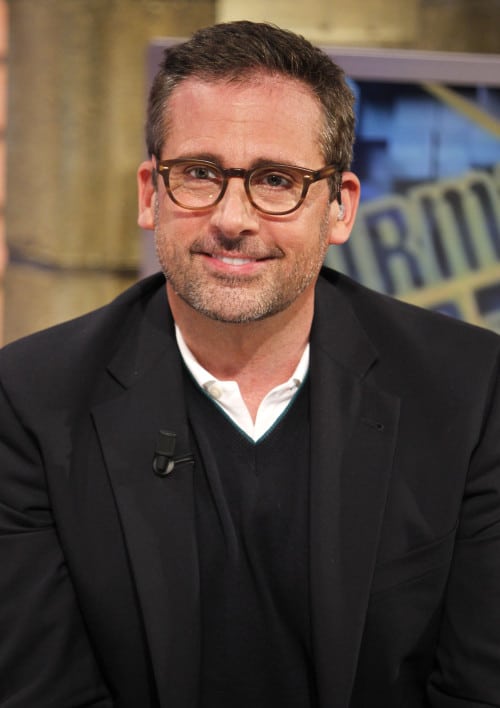 Carell is married to Saturday Night Live alumna Nancy Carell (nÃ©e Walls), whom he met when she was a student in an improvisation class he was teaching at Second City. In addition to working with Carell as a fellow correspondent on The Daily Show, Nancy Carell acted with him on The Office as his realtor and short-lived girlfriend Carol Stills, and also cameoed as a sex therapist in The 40-Year-Old Virgin and played Linda in Seeking a Friend for the End of the World. The couple have two children, Elisabeth (born May 2001) and John (born June 2004).