Van Damme was born Jean-Claude Camille François Van Varenberg, on 18 October 1960, in Berchem-Sainte-Agathe, Brussels, Belgium, the son of Eliana and Eugène Van Varenberg, who was an accountant.

He began martial arts at the age of ten, enrolled by his father in a Shotokan karate school. His styles consist of Shotokan Karate and Kickboxing. He eventually earned his black belt in karate at 18. He started lifting weights to improve his physique, which eventually led to a Mr. Belgium bodybuilding title. At the age of 16, he took up ballet, which he studied for five years. According to Van Damme, ballet “is an art, but it’s also one of the most difficult sports. If you can survive a ballet workout, you can survive a workout in any other sport.” Later he took up both Taekwondo and Muay Thai.

At the age of 15, Van Damme started his competitive karate career in Belgium. From 1976-1980, Van Damme compiled a record of 44 victories and 4 defeats in tournament and non-tournament semi-contact matches.

Van Damme was a member of the Belgium Karate Team when it won the European Karate Championship on 26 December 1979 at La Coupe Francois Persoons Karate Tournament in Brussels. 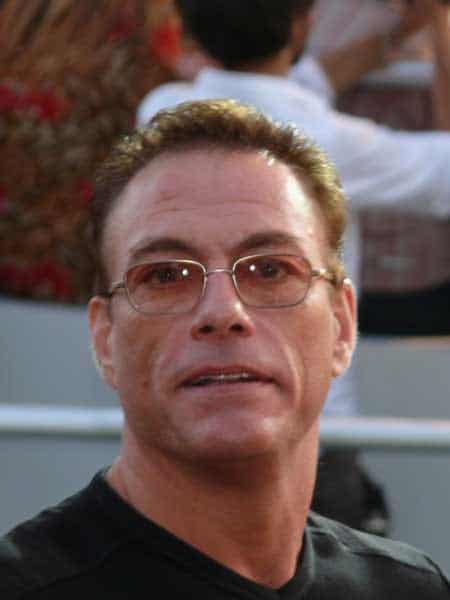 On 8 March 1980, in Brussels, Belgium, Van Damme competed against his former team-mate Patrick Teugels at the Forest National Arena on the undercard of the Dan Macaruso-Dominique Valera Professional Karate Association Light-Heavyweight World Championship bout. Prior to this match, Teugels had defeated Van Damme twice by decision, including a match for the Belgium Lightweight Championship. Van Damme had a 1977 victory over Teugels. Teugels was coming off an impressive showing at the World Association of Kickboxing Organizations World Championships four months earlier, and was favored by some to win this match. According to reports, and Patrick Teugels’ own interview (with photos), Teugels lost to Van Damme by TKO in the 1st round. Teugels was kicked in the nose and was unable to continue as a result. In a 2013 interview, Van Damme called this fight his most memorable match.

Van Damme began his full-contact career in 1977, when Claude Goetz promoted the first ever full-contact karate tournament in Belgium.

Since 2009, Van Damme has been planning to make a comeback to fight former boxing Olympic gold-medalist Somluck Kamsing. The fight was a focal point in his ITV reality show Jean Claude Van Damme: Behind Closed Doors. The fight has been repeatedly postponed, with many critics doubting it will, occur, especially due to the difficulty of booking the venue. December 2012, Van Damme was seen as part of Kam Sing’s ring crew, when Kam Sing fought against Jomhod Kiatadisak.

In 1982, Van Damme and childhood friend, Michel Qissi, moved to the United States in the hope of becoming action stars. They both were cast as extras in the film, Breakin’. Van Damme also had a non-speaking part as a Secret Service agent who carries a polio-crippled President Franklin Roosevelt (Ralph Bellamy) out of a pool in the 1988 TV miniseries War and Remembrance. After a small part in Missing in Action, Van Damme was next cast in the film No Retreat, No Surrender, as the role of the villain, Ivan the Russian. Van Damme worked for director John McTiernan for the 1987 film Predator as an early (eventually abandoned) version of the titular alien, before being removed and replaced by Kevin Peter Hall. His breakout film was Bloodsport, based on the alleged true story of Frank Dux. Shot on a 1.5 million dollar budget, it became a U.S. box-office hit in the spring of 1988. He then starred in the smaller budgeted film Cyborg. His last role for 1989 was Kurt Sloane in the successful Kickboxer. In this film, his character fights to avenge his brother who has been paralyzed by a Thai kickboxing champion (Qissi). The following year he starred in the film Lionheart. The film is about a French Legionnaire who deserts his post to return to Los Angeles, after his brother is murdered and enters the underground fighting circuit to raise money for his brother’s family.

Double Impact featured Van Damme in the dual role of Alex and Chad Wagner, estranged twin brothers fighting to avenge the deaths of their parents. This film reunited him with his former Bloodsport co-star, Bolo Yeung. He then starred opposite Dolph Lundgren in the action film Universal Soldier. While it grossed $36,299,898 in the U.S., it was an even bigger success overseas, making over $65 million, well over its modest $23 million budget, making it Van Damme’s highest grossing film at the time. Van Damme followed Nowhere to Run and Hard Target with Timecop in 1994. The film was a huge success, grossing over $100 million worldwide. In the film, Van Damme played a time traveling cop, who tries to prevent the death of his wife. It remains his highest grossing film in a lead role to date.

After his role in the poorly received Street Fighter, his projects started to fail at the box office. Sudden Death (1995); The Quest (1996), which he directed; Maximum Risk (1996), Double Team (1997) and Knock Off (1998) were box-office flops. The 1999 film Universal Soldier: The Return, also a box-office flop, was Van Damme’s last theatrically released film until 2008. In 2003, Van Damme employed his dancing training in the music video for Bob Sinclar’s “Kiss My Eyes.”

Van Damme returned to the mainstream with the limited theatrical release of the 2008 film JCVD, which received positive reviews. Time Magazine named Van Damme’s performance in the film the second best of the year (after Heath Ledger’s The Joker in The Dark Knight), having previously stated that Van Damme “deserves not a black belt, but an Oscar.” Van Damme indicated while promoting the film, he experienced a period of homelessness “sleeping on the street and starving in L.A.”

He was offered a lead role in Sylvester Stallone’s 2010 film The Expendables. Stallone called Van Damme personally to offer him the role, but Van Damme turned it down. He scheduled a series of film projects for 2011, including another Universal Soldier movie. On 30 June 2011, Van Damme confirmed his participation in The Expendables 2, which was released on 17 August 2012.

He voiced Master Croc in the 2011 animated film Kung Fu Panda 2 reprising the role in Kung Fu Panda 3 in 2016. That same year Van Damme appeared in commercials for Coors Light beer, showing him on a snow-covered mountain wearing a sleeveless denim jacket, and for the washing powder Dash.

On 21 October 2012, Van Damme was honored with a life-size statue of himself in his hometown of Brussels. He told reporters during the unveiling, “Belgium is paying me back something, but really it’s to pay back to the dream. So when people come by here, it is not Jean-Claude Van Damme but it’s a guy from the street who believed in something. I want the statue to represent that”.

Van Damme appears in the 2013 comedy Welcome to the Jungle directed by Rob Meltzer, in a role as a workplace team building trainer opposite Adam Brody, Rob Huebel, Kristen Schaal, Megan Boone, and Dennis Haysbert.

He starred in the thriller Enemies Closer, which reunited him with Timecop and Sudden Death director Peter Hyams.

Van Damme indicated that Stallone might include him in The Expendables 3, in which Van Damme would play Claude Villain, the brother to his Expendables 2 character Jean Villain. The casting of Mel Gibson as the film’s villain, however, made this less than likely. Van Damme ended up not featuring in the film.

In 2015 he features in a new situation comedy television series JC 1er which is set to broadcast on French television channel Canal+.

In 1997, Frank Dux, the martial artist whom Van Damme portrayed in Bloodsport, filed a lawsuit against Van Damme for $50,000 for co-writing and consultation work Dux did on the 1996 film The Quest. According to the lawsuit, Dux also accused Van Damme of lying to the public about his martial arts fight record, stating that when Dux tutored Van Damme while Van Damme was laying carpet for a living, Van Damme exhibited a lack of martial arts skills. Van Damme’s lawyer, Martin Singer, responded, “There are records to document his martial arts acclaim. Why, just look at his movies; he didn’t get those roles on his acting ability! He’s the one who does those splits on chairs. He doesn’t have a stuntman to do that.”

In October 2011, Van Damme, along with other celebrities including Hilary Swank, Vanessa-Mae and Seal attracted criticism from human rights groups for attending an event in Russian federal subject Chechnya’s capital Grozny on the 35th birthday of Chechen president Ramzan Kadyrov on 5 October. Human rights groups, who had urged the celebrities to cancel their appearances because of abuses carried out under Kadyrov, criticised the celebrities for attending the event. Human Rights Watch released a statement which said, “Ramzan Kadyrov is linked to a litany of horrific human rights abuses. It’s inappropriate for stars to get paid to party with him […] And getting paid to be part of such a lavish show in Chechnya trivializes the suffering of countless victims of human rights abuses there.”

In the French-speaking world, Van Damme is well known for the picturesque aphorisms that he delivers on a wide range of topics (personal well-being, the environment, etc.) in a sort of Zen franglais.

The original video game Mortal Kombat was conceived as a fighting game based on Van Damme. Creators Ed Boon and John Tobias originally had desired to author the game starring Van Damme himself. That fell through as Van Damme had a prior deal for another game under the auspices of the Sega Genesis platform. Ed Boon and John Tobias eventually decided to create a different character for the game named Johnny Cage, who is modelled after Jean-Claude Van Damme, primarily from Van Damme’s appearance and outfit in the martial arts film Bloodsport.

On 13 November 2013, Volvo Trucks released an advertisement on YouTube that shows Van Damme doing the splits while perched with each of his feet on the outer rearview mirrors of one semi-trailer truck and one box truck moving backwards, which Van Damme describes in the commercial as “the most epic of splits”. The video quickly went viral around the web, receiving more than 11 million views in three days, 35 million in the first week.

By the mid-1990s, the stress of the constant filming and promotion of his films, as Van Damme explains, led him to develop a cocaine habit, on which he spent up to $10,000 a week, and consuming up to 10 grams per day by 1996. He was arrested for driving under the influence in 1999. Attempts at drug rehabilitation were unsuccessful, and he resorted to resolve his addiction via quitting cold turkey and exercise. In 1998, he was diagnosed with bipolar disorder. In 2011, he discussed the condition on the British reality show Jean-Claude Van Damme: Behind Closed Doors, saying, “Sometimes you’re gonna like me, and sometimes you’re gonna hate me. But what can I do? I’m not perfect … I’m an extreme bipolar, and I’m taking medication for this … When I was young, I was suffering those swing moods. In the morning, the sky was blue [when I was] going to school, and to me, the sky was black. I was so sad.”

Van Damme has been married five times to four different women. He was married to his third wife, bodybuilder Gladys Portugues – with whom he has two children: Kristopher (born 1987) and Bianca (born 1990) – until 1992, when he began an affair with actress Darcy LaPier, whom he married in February 1994. That same year he had an affair with his Street Fighter co-star Kylie Minogue during filming of that movie in Thailand. LaPier, who was pregnant at the time with their son, did not become aware of this until Van Damme publicly admitted this in 2012. After leaving LaPier, Van Damme remarried bodybuilder Portugues in 1999, and they later again separated. In early 2015, Portugues has filed for a second divorce from Van Damme – citing irreconcilable differences. However, in May 2015 they appeared to have reconciled and called off the divorce.