Jeffrey Leon “Jeff” Bridges (born December 4, 1949) is an American actor, country musician, and producer. He comes from a well-known acting family and began his televised acting in 1958 as a child with his father, Lloyd Bridges, and brother, Beau, on television’s Sea Hunt. He won the Academy Award for Best Actor for his role as Otis “Bad” Blake in the 2009 film Crazy Heart and earned Academy Award nominations for his roles in The Last Picture Show, Thunderbolt and Lightfoot, Starman, The Contender, and True Grit. Among his other best-known major motion films are: The Big Lebowski, Fearless, Iron Man, The Fabulous Baker Boys, Jagged Edge, Against All Odds, The Fisher King, Seabiscuit, Arlington Road, TRON and TRON: Legacy.

Jeffrey Leon Bridges was born in Los Angeles, California on December 4, 1949. He is the son of showbiz parents, actor Lloyd Bridges (1913-1998) and actress and writer Dorothy Bridges (née Simpson; 1915-2009). His older brother, Beau Bridges, is also an actor. He has a younger sister, Lucinda, and had another brother, Garrett, who died of sudden infant death syndrome in 1948. His maternal grandfather was an English immigrant (from Liverpool).

Bridges and his siblings were raised in the Holmby Hills section of Los Angeles. Growing up, Bridges shared a close relationship with his brother Beau, who acted as a surrogate father when their father was working. He graduated from University High School in 1967. At age seventeen, Jeff toured with his father in a stage production of Anniversary Waltz. After graduating from high school, Bridges journeyed to New York City, where he studied acting at the Herbert Berghof Studio. Also, after turning 18, Bridges joined the United States Coast Guard Reserve, where he served for eight years.

Bridges made his first screen appearances at the age of four months in The Company She Keeps in 1950. In his youth, Bridges and brother Beau made occasional appearances on their father’s show Sea Hunt (1958-1961) and the CBS anthology series, The Lloyd Bridges Show (1962-1963). In 1971 he played the lead role Mike in the TV movie In Search of America. His first major role came in the 1971 film The Last Picture Show, for which he garnered a nomination for the Academy Award for Best Supporting Actor. He co-starred in the 1972 critically acclaimed neo-noir boxing film Fat City, directed by legendary director, John Huston. He was nominated again for Best Supporting Actor for his performance opposite Clint Eastwood in the 1974 film Thunderbolt and Lightfoot. In 1976, he starred as the protagonist Jack Prescott in the first remake of King Kong, opposite Jessica Lange. This film was a commercial success, earning $90 million worldwide, more than triple its $23 million budget, and also winning an Academy Award for special effects.

One of his better known roles was in the 1982 science fiction cult classic TRON, in which he played Kevin Flynn, a video game programmer (a role he reprised in late 2010 with the sequel TRON: Legacy). He was nominated for the Academy Award for Best Actor in 1984, for playing the alien in Starman. He was also acclaimed for his roles in the thriller Against All Odds (1984) and the crime drama Jagged Edge (1985). His role in Fearless (1993) is recognized by some critics to be one of his best performances. One critic dubbed it a masterpiece; Pauline Kael wrote that he “may be the most natural and least self-conscious screen actor that has ever lived”. In 1998, he starred as what is arguably his most famous role, “The Dude”, in the Coen Brothers’ cult-classic film The Big Lebowski. He has said that he relates to “The Dude” more than any of his other roles.[]

In 2000, he received his fourth Academy Award nomination, for his role in The Contender. He also starred in the 2005 Terry Gilliam film Tideland, his second with the director (the first being 1991’s The Fisher King). He shaved his trademark[] mane of hair to play the role of Obadiah Stane in the 2008 Marvel comic book adaptation Iron Man. In July 2008, at the San Diego Comic-Con International, he appeared in a teaser for TRON: Legacy, shot as concept footage for director Joseph Kosinski; this developed into a full 3D feature release in 2010.

Bridges is one of the youngest actors ever to be nominated for an Academy Award (1972, age 22, Best Supporting Actor, The Last Picture Show), and one of the oldest ever to win (2010, age 60, Best Actor, Crazy Heart). Crazy Heart also won him the Golden Globe for Best Actor in a Drama, and the Screen Actors Guild Award for Outstanding Performance by a Male Actor in a Leading Role.

Bridges received his sixth Academy Award nomination for his role in True Grit, a collaboration with the Coen brothers in which he starred alongside Matt Damon, Josh Brolin, Barry Pepper, and Hailee Steinfeld. Both the film, and Bridges’s performance as Rooster Cogburn, were critically praised. Bridges lost to Colin Firth, whom he had beaten for the Oscar in the same category the previous year.

Referring to his career as an actor and his passion for music, Bridges says, “I dug what an actor did, but it took me a while to feel it, to truly appreciate the craft and the preparation. Plus, I was still playing music a lot, and I guess I had a hard time choosing: was I an actor or a musician, or could I be both?”

Bridges studied piano at a young age strongly encouraged by his mother. It was known that, while working on the 1980 film Heaven’s Gate, he often played guitar with his costar, the singer Kris Kristofferson, between takes. His character in Crazy Heart, Bad Blake, was later based partly off Kristofferson. He released his debut album Be Here Soon on January 1, 2000. In 2005, Bridges, known as “The Dude” in the film Big Lebowski, showed up at a Lebowski Fest in Los Angeles singing and playing the film’s theme song written by Bob Dylan, “Man in Me”.

On January 15, 2010, Bridges performed the song “I Don’t Know” from Crazy Heart on The Tonight Show with Conan O’Brien. In the film The Contender, in which he co-starred, Bridges recorded a version of Johnny Cash’s standard “Ring of Fire” with Kim Carnes that played over the pivotal opening credits. In February 2010, he was among the nearly 80 musicians to sing on the charity-single remake of We Are the World. On October 24, 2010, Bridges appeared at Neil Young’s annual Bridge School Benefit concert and played a set with singer-songwriter Neko Case.

On April 19, 2011, Country Music Television announced that Bridges had signed a recording contract with Blue Note Records/EMI Music Group. He worked with producer T-Bone Burnett and released his second album, Jeff Bridges, on August 16, 2011. On November 5, 2011, Bridges played Austin City Limits in support of this album. 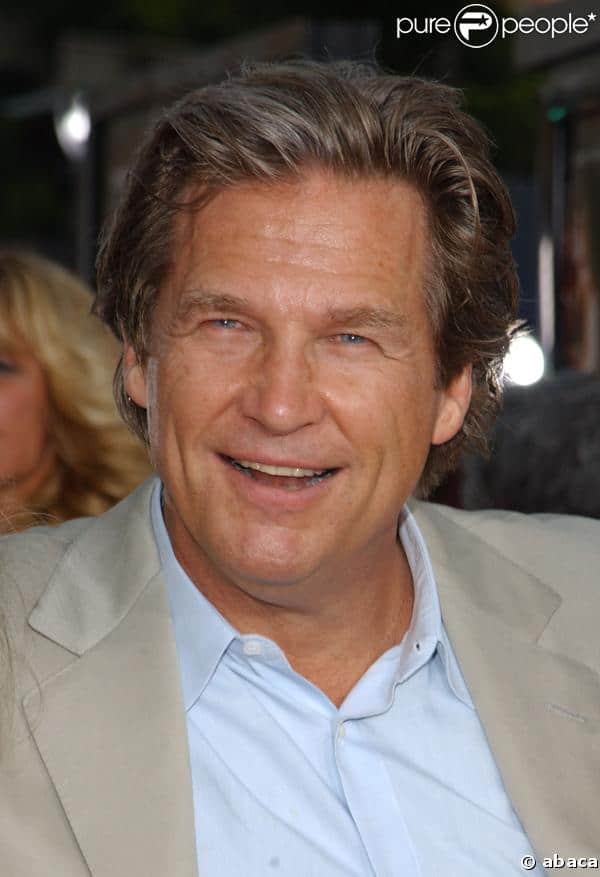 Jeff Bridges has been an amateur photographer since high school, and began taking photographs on film sets during Starman, at the suggestion of co-star Karen Allen. Since 1980, he began photographing on and off set shot with his favorite camera, a Widelux F8. He published many of these photographs online and published a book in 2003 entitled, Pictures: Photographs by Jeff Bridges.

Bridges narrated the documentary Lost in La Mancha (2002), about the unmaking of a Terry Gilliam retelling of Don Quixote, tentatively titled The Man Who Killed Don Quixote, which would have starred Johnny Depp as Sancho Panza and Jean Rochefort as the quixotic hero. Bridges had previously appeared in Gilliam’s The Fisher King. Bridges also narrated the documentaries National Geographic’s Lewis & Clark: Great Journey West (2002, IMAX), Discovery Channel’s Raising the Mammoth (2000), and ABC’s Heroes of Rock and Roll (1979). He also voiced the character Big Z in the animated picture Surf’s Up.

Bridges has performed TV commercial voice over work as well, including Hyundai’s 2007 “Think About It” advertising campaign as well as the Duracell advertisements in the “Trusted Everywhere” campaign.

On December 18, 2010, Bridges hosted NBC’s Saturday Night Live; he had hosted the show before in 1983 with his brother, Beau. With the December 18, 2010 episode, Bridges beat Sigourney Weaver’s record for longest gap between hosting appearances on SNL (Weaver had a 24-year gap between her first time hosting in 1986 and her second time hosting in 2010, while Bridges had a 27-year gap between his first appearance in 1983 and his most recent one, also in 2010).

Bridges married Susan Geston in 1977. They met on the film shoot of Rancho Deluxe, which was filmed on a ranch where Geston was working as a maid. They have three daughters: Isabelle Annie (born August 6, 1981), Jessica Lily “Jessie” (born June 14, 1983), and Hayley Roselouise (born October 17, 1985). He became a grandfather on March 31, 2011, when Isabelle gave birth to a daughter, Grace. Jeff once stated, “I had a great ’70s. Today, being a parent with three daughters, I look back on it thinking, “Oh, man, the things I did!””

Bridges has studied Buddhism. He meditates for half an hour before beginning work on a film set.

He currently lives in Montecito, California. 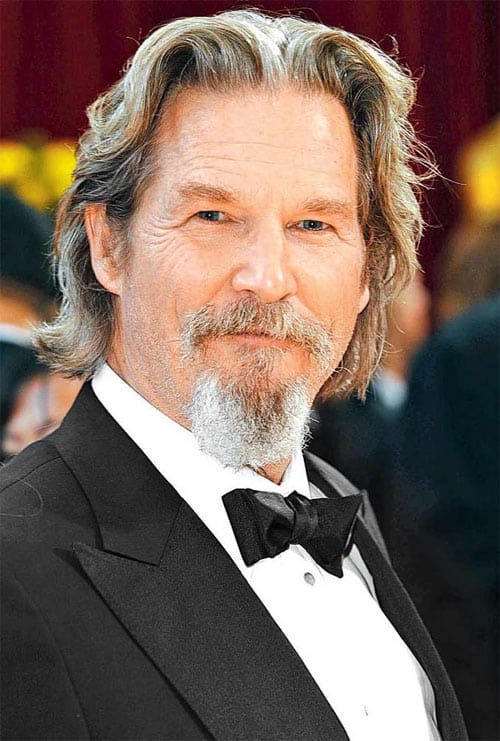 In 1984, Bridges and other entertainment industry leaders founded the End Hunger Network aimed at encouraging, stimulating and supporting action to end childhood hunger. He supports President Obama’s initiative to End Childhood Hunger by 2015. In November 2010, Bridges became spokesman for the No Kid Hungry Campaign of the organization Share our Strength. Its goal is to present and undertake a state-by-state strategy to end childhood hunger in the United States by 2015.

He has teamed up with the Zen Peacemakers, who operate a non-traditional soup kitchen. An edited version of a transcript of a conversation he had with Zen master Bernard Glassman is published in the 2013 book “The Dude and the Zen Master.”