Edward James Martin “Ted” Koppel (born February 8, 1940) is an American broadcast journalist, best known as the anchor for Nightline from the program’s inception in 1980 until his retirement in late 2005. After leaving Nightline, Koppel worked as managing editor for the Discovery Channel before resigning in 2008. Koppel is currently a senior news analyst for NPR and contributing analyst to BBC World News America, and contributes to NBC News. 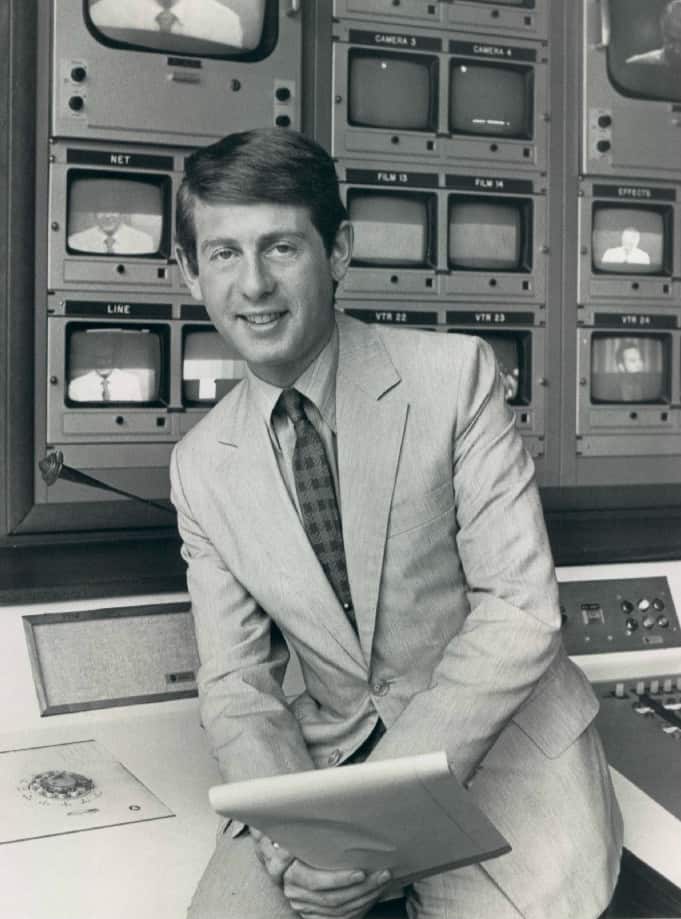 Koppel, an only child, was born in Nelson, Lancashire, UK, after his German Jewish parents fled Germany following the rise of Adolf Hitler and Nazism. In 1953, when he was 13, the family immigrated to the United States. His mother, Alice, was a singer and pianist, and his father, Edwin, was a tire factory owner. He graduated from Syracuse University with a Bachelor of Science degree and from Stanford University with a Master of Arts degree in mass communications research and political science. In 1987, he received an honorary Doctor of Humane Letters degree from Duke University. In 2007, the University of Southern California awarded Koppel an honorary Doctor of Laws degree. Koppel returns to Syracuse University regularly as a guest speaker. He was a member of the student-run WAER and keeps in touch with the student media at Syracuse. He is a member of the Pi Kappa Alpha Fraternity.

Koppel had a brief stint as a teacher before being hired as a copyboy at WMCA Radio in New York. In June 1963, he became the youngest correspondent ever hired by ABC Radio News, working on the daily Flair Reports program. Starting in 1966, Koppel worked for ABC Television as a war correspondent during the Vietnam War. He returned in 1968 to cover the campaign of Richard Nixon, before becoming Hong Kong bureau chief, and U.S. State Department correspondent, where Koppel formed a friendship with Henry Kissinger.

Koppel was among those traveling to China with U.S. President Richard Nixon in 1972. He spoke about this with the USC U.S.-China Institute for their Assignment: China documentary series on American media coverage of China. Koppel likened the trip to a journey to the dark side of the moon.

It was suggested that Koppel was a conduit for the government’s point of view. In the late 1980s, the progressive media criticism organization Fairness and Accuracy in Reporting (FAIR) conducted a 40-month study of 865 episodes of Nightline and concluded: “On shows about international affairs, U.S. government policymakers and ex-officials dominated the Nightline guest list. American critics of foreign policy were almost invisible.” In 1987, Newsweek opined: “The anchor who makes viewers feel that he is challenging the powers that be on their behalf is in fact the quintessential establishment journalist”. Koppel responded to this by saying: “We are governed by the president and his cabinet and their people. And they are the ones who are responsible for our foreign policy, and they are the ones I want to talk to”. Koppel’s interviews were not limited only to issues of economics, politics, culture, sports, and war, but also covered sensitive issues such as the discrimination practiced in country golf clubs. He studied the subject matter of his Nightline broadcasts thoroughly and never hesitated to put uncomfortable questions to people occupying high offices. Soon after Nelson Mandela’s release from imprisonment, Koppel did an interview with him in the U.S. He asked Mandela about his association with notorious human rights violators such as Muammar Gaddafi, Fidel Castro, and Yasser Arafat. Mandela said that these people supported his cause by action. He refused to choose his enemies according to somebody else’s criteria, and went further: “… anybody who changes his principles depending on whom he is dealing with, that is not a man who can lead a nation”. Later, he silenced Koppel completely by commenting that he seems ill-prepared for the interview and wasn’t being impartial enough.

Koppel was invited to deliver a convocation speech at the University of Pennsylvania, which was published in Forbes magazine during the early 1990s. There he questioned President George H. W. Bush’s claims about the casualty figures that were incurred by the surgical strikes that he ordered on Iraq during the Gulf War in 1991.

On November 22, 2005, Koppel stepped down from Nightline after 25 years with the program and left ABC after 42 years with the network. His final Nightline broadcast did not feature clips highlighting memorable interviews and famous moments from his tenure as host, as is typical when an anchor retires. Instead, the show replayed the highly acclaimed episode of Nightline with Koppel’s 1995 interviews with retired Brandeis University sociology professor Morrie Schwartz, who was dying of amyotrophic lateral sclerosis (ALS, more commonly known as Lou Gehrig’s disease). For this broadcast, Koppel interviewed sports journalist Mitch Albom, who had been a student of Schwartz. Albom talked about how the Nightline interviews led and inspired him into contacting Schwartz personally, and then visiting him weekly. These visits became the basis for the popular book Tuesdays with Morrie, chronicling lessons about life learned from Schwartz.

After the show’s last commercial break, Koppel made his final remarks prior to signing off:

Following Nightline Koppel has taken on a number of roles which span various formats of news media:

Following his departure from Nightline Koppel formed a three-year partnership with Discovery Communications as managing editor of the Discovery Channel. While at Discovery, Koppel produced several lengthy documentaries on a variety of subjects including a 2008 four-hour miniseries on China, which Koppel “ranks with some of the work that [he is] most proud of over the years.” The four-part documentary, called The People’s Republic of Capitalism, is an extensive look at the fast-changing country. It takes a look at the role of Chinese consumers in the growing -but yet communist- economy.

Koppel and Discovery Communications parted ways in November, 2008, terminating their contract six months early, prompting rumors that Koppel would be hired for NBC’s Meet the Press. Koppel has stated that he is not interested in the job.

In 1963, Koppel became a naturalized U.S. citizen, and married Grace Anne Dorney, a Roman Catholic. They have four children: Andrea (a former journalist), Deirdre, Andrew, and Tara. Andrew Koppel was found dead in a New York City apartment on May 31, 2010, reportedly after a day-long drinking binge. Koppel is multilingual and speaks German and French in addition to his native English.

Koppel is an old friend of Henry Kissinger. Both Kissinger and Koppel moved to the United States as children. Along with former Secretary of State Alexander Haig, Kissinger was the most frequent guest on Nightline. In an interview, Koppel commented, “Henry Kissinger is, plain and simply, the best secretary of state we have had in 20, maybe 30 years – certainly one of the two or three great secretaries of state of our century,” and added, “I’m proud to be a friend of Henry Kissinger. He is an extraordinary man. This country has lost a lot by not having him in a position of influence and authority”.