Liotta was born in Newark New Jersey, and was adopted at the age of six months by Mary, an appointed township clerk, and Alfred Liotta, an auto parts store owner, personnel director, and the president of a local Democratic club. His adoptive parents both unsuccessfully ran for local office. He has a sister, Linda Liotta, who is also adopted.

Liotta said he knew he was adopted as a young child, as he did a show and tell report on it for kindergarten. Liotta found his biological mother in the 2000s. Liotta’s adoptive parents were of Italian and Scottish/Irish ancestry; by birth, he is not of Italian descent. After research and talks with his biological mother, Liotta discovered he is of part Scottish ancestry. “I found my birth mother and found out I have, not an identical twin, but a half brother, five half sisters and a full sister that I didn’t know about until 15 years ago.”

As a kid, Liotta said being adopted, he “felt like I was given up,” but as an adult he resolved these issues. On his birth mother: “I found out she’d already had a child with the same guy, but he didn’t want to get married. He went off to the Korean War, they got together again when he came back, I came out, they took me home. And they realized they couldn’t afford it. So I was bonding with her, and, boom, they ripped me away.”

Liotta was raised Roman Catholic although his family was not very religious. “We did go to church, we were not raised in a strict home. We went to church every Sunday but we had a horrible priest,” Liotta said. “I was brought up Catholic and he was just scary, [church] was just so heavy and scary. [He] gave me this huge fear of death … I’d definitely say I’m much more spiritual than religious.” Liotta said the family went to church when he was a kid, and he got his first communion and was confirmed “but we didn’t pray before every meal or anything like that. I’m a work-in-progress but yet if I’m in a fix I’ll pray … if I’m feeling uncomfortable about something I’ll say “Our Father’s” and “Hail Marys” to this day,” he said. “My daughter went to a Christian school [and] I was involved in a lot of [her schooling] and I think it goes back to [me] having that scary priest.”

Liotta’s parents were both Democrats. On his political involvement as a child, Liotta said that he remembers going to parades handing out materials for his dad, and going door-to-door canvassing for his father’s run for Township Committee. As an actor, Liotta says he doesn’t think that actors should put themselves out there, doesn’t think it’s the best thing for an actor to do because there’s too much out there on them if you want to do different parts. “I vote, I’m active, I listen to things, but….”

He graduated from Union High School in 1973 in Union, New Jersey where he grew up.

Liotta graduated from the University of Miami, where he received a degree in Fine Arts in 1978 and studied acting with Robert “Buckets” Lowery with fellow actor Steven Bauer. He said he did a lot of musicals (Cabaret, Dames at Sea, Oklahoma, Sound of Music) during college, especially in his first year of acting studies.

After college Liotta moved to New York City. He got a job as a bartender at the Shubert theaters and landed an agent within six months.

One of Liotta’s earliest roles was as Joey Perrini on the soap opera Another World; he appeared on the show from 1978 to 1981. He infamously made his film debut in a sexual assault scene with Pia Zadora and a garden hose in the 1983 cult classic The Lonely Lady.

Liotta describes his career progression as: 6 months out of college, Liotta lands a soap, Another World, for 5 years (until he was 25 years old); he quits the soap because he moved to Los Angeles to try and work in the movies; acting school with Harry Mastergeorge, who he heard about from his friends Stephen Bauer and Melanie Griffith; was in acting class for 12 years; lands first major acting role at the age of 31, with Something Wild.

In 1987, he earned his first Golden Globe nomination for his portrayal of volatile ex-con Ray Sinclair in Jonathan Demme’s film Something Wild (1986). In 1989, he costarred alongside Kevin Costner in the fantasy/drama film Field of Dreams– Liotta portrayed Shoeless Joe Jackson, the ghost of the famed baseball player. His voice over line, “If you build it, he will come,” is #39 on the American Film Institute’s list of 100 movie quotes.

In 1990, Liotta portrayed real-life mobster Henry Hill in Martin Scorsese’s film GoodFellas. “It was a weird experience for me, because my mom was really sick, so that was going on, and really tempered what I was feeling at the time,” Liotta says. “But that movie, it’s amazing, it definitely has a life of its own, and it’s only grown over time. People watch it over and over, and still respond to it, and different ages come up, even today, teenagers come up to me and they really emotionally connect to it.”

On this early period in his career, Liotta said that after such strong first few movies, he thinks the representatives he had let him flounder; inspired by the films of the 1970s, he wanted to play different types of roles.

In 1992, he costarred as a psychopathic cop alongside Kurt Russell and Madeleine Stowe in the thriller Unlawful Entry. He also appeared in a leading role in the sci-fi/action film No Escape. Liotta would earn more critical praise for his turn in James Mangold’s film Cop Land, starring alongside Sylvester Stallone, Robert De Niro, and Harvey Keitel. In 1998, he received critical praise for his performance in the crime film Phoenix, in which he plays decent policeman Harry Collins who is also a compulsive gambler.

In addition to his film roles, Liotta portrayed singer Frank Sinatra in the 1998 TV movie The Rat Pack (for which he received a Screen Actors Guild Award nomination), he provided the voice of Tommy Vercetti for the 2002 video game Grand Theft Auto: Vice City, and appeared in the television drama ER in 2004, playing Charlie Metcalf in the episode “Time of Death”. The ER role earned Liotta an Emmy for “Outstanding Guest Actor in a Drama Series” (Liotta would later spoof himself and his Emmy win in Bee Movie). Liotta starred in the 2006 CBS television series Smith, which was pulled from the schedule after only three episodes had aired, and, in 2012, Liotta appeared as himself in a purely vocal role for the “What a Croc!” episode of the Disney Channel comedy series Phineas & Ferb.

Liotta played the father of drug dealer George Jung in the 2001 Johnny Depp film Blow and, in the following year, appeared as Det. Lt. Henry Oak in the Joe Carnahan-directed film Narc, a role that led to an Independent Spirit Award nomination and a Phoenix Film Critics Society Awards nomination for Best Supporting Male. He then reunited with director James Mangold in 2003, alongside John Cusack and Alfred Molina, in the dark horror-thriller Identity. In 2005, he narrated Inside the Mafia for the National Geographic Channel. He later appeared in Smokin’ Aces–reuniting with Narc director Carnahan–in which he portrayed an FBI agent named Donald Carruthers in one of the lead roles.

Liotta appeared with John Travolta in the movie Wild Hogs, in Battle in Seattle as the city’s mayor, and in Hero Wanted as a detective alongside Cuba Gooding Jr.. He was also in Crossing Over, co-starring Harrison Ford. Liotta played Detective Harrison in the 2009 Jody Hill comedy Observe and Report as Seth Rogen’s nemesis from the local police. In 2011, he starred in The Son of No One, opposite Channing Tatum and, for the first time in his career, Al Pacino.

In 2004, Liotta made his Broadway debut opposite Frank Langella in the Stephen Belber play, Match.

In the 2010s, Liotta appeared in Date Night, with Steve Carell, Charlie St. Cloud with Zac Efron, the independent drama Snowmen, and The River Sorrow, which stars Liotta as a detective alongside Christian Slater and Ving Rhames. Liotta starred alongside Brad Pitt and James Gandolfini in the 2012 Andrew Dominik film Killing Them Softly and the 2013 Ariel Vromen film The Iceman features Liotta as the character of Roy DeMeo. He had a supporting role in Muppets Most Wanted (2014).

In 2014, Liotta played a preacher in the faith-based film, The Identical. He also had a supporting role in crime drama film Revenge of the Green Dragons, executive produced by Martin Scorsese .

Liotta will star in the Western miniseries Texas Rising for The History Channel in 2015. Other projects include Kill the Messenger with Jeremy Renner, Stretch with Chris Pine and a David Guetta video.

In June 2015, Liotta will narrate the AMC Networks series called The Making of the Mob: New York. 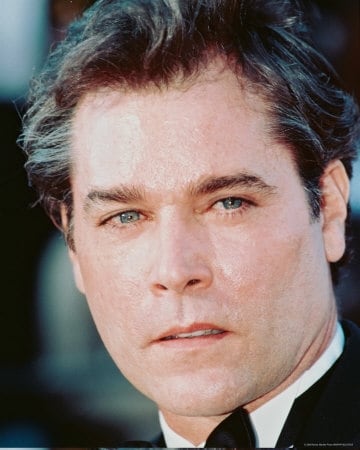 Liotta married actress Michelle Grace in February 1997 after they met at her ex-husband (Mark Grace)’s professional baseball game. The couple co-starred in The Rat Pack, in which Liotta played Frank Sinatra and Grace played Judith Campbell Exner. They have a daughter named Karsen born in 1998. The couple divorced in 2004.

From his experience shooting the Western, Texas Rising, Liotta says he’s continued horseback riding. He said, “I was obsessed with riding horses [on the show]. I love it now. I’ve never had a hobby. It might be my new hobby. Just love it, everything about them. Horses are unbelievable: Smart, loyal — and moody, [laughing] which I can relate to.”