Kevin Delaney Kline (born October 24, 1947) is an American actor. He has won an Academy Award and two Tony Awards, and is a 2003 American Theatre Hall of Fame inductee.

Kline began his career on stage in 1972 with The Acting Company. He went on to win two Tony Awards for his work in Broadway musicals, winning Best Featured Actor in a Musical for the 1978 original production of On the Twentieth Century and Best Actor in a Musical for the 1981 revival of The Pirates of Penzance. He made his film debut the following year, opposite Meryl Streep in Sophie’s Choice (1982). For his role in the 1988 comedy hit A Fish Called Wanda, he won the Academy Award for Best Supporting Actor. In 2003, he starred as Falstaff in the Broadway production of Henry IV, for which he won the Drama Desk Award for Outstanding Actor in a Play. He has also been nominated for an Emmy Award, two BAFTA Awards and five Golden Globe Awards. His other films include The Big Chill (1983), Silverado (1985), Cry Freedom (1987), Dave (1993), The Ice Storm (1997), In & Out (1997), De-Lovely (2004) and My Old Lady (2014).

Kline was born in St. Louis, Missouri, the son of Margaret and Robert Joseph Kline. His father was a classical music lover and an amateur opera singer who owned and operated The Record Bar, a record store in St. Louis that opened in the early 1940s, and sold toys during the 1960s and 1970s; his father’s family also owned Kline’s Inc., a department store chain. Kline has described his mother as the “dramatic theatrical character in our family.” Kline’s father was Jewish, from a family that had emigrated from Germany; Kline’s mother was of Irish descent, the daughter of an emigrant from County Louth.

Kline was raised in his mother’s Catholic religion (his father had become an agnostic). He has three siblings, Alex, Christopher, and Kate. He graduated from the Catholic Saint Louis Priory School in 1965; in 1997, the school named its new auditorium the Kevin Kline Theater, and Kline did a benefit performance of selections from Shakespeare at the dedication. He attended Indiana University in Bloomington, Indiana, where he began as an aspiring classical pianist. After joining the on-campus theater group “Vest Pocket Players” as an undergraduate, he fell in love with the theater and switched to acting, graduating from IU in 1970.

In 1970, Kline was awarded a scholarship to the newly formed Drama Division at the Juilliard School in New York. In 1972, he joined with fellow Juilliard graduates, including Patti LuPone and David Ogden Stiers, and formed the City Center Acting Company (now The Acting Company), under the aegis of John Houseman. The Company traveled across the U.S. performing Shakespeare’s plays, other classical works, and the musical The Robber Bridegroom, founding one of the most widely praised groups in American repertory theatre.

In 1976, Kline left The Acting Company and settled in New York City, doing a brief appearance as the character “Woody Reed” in the now-defunct soap opera Search for Tomorrow. He followed this with a return to the stage in 1977 to play Clym Yeobright opposite Donna Theodore as Eustacia Vye in The Hudson Guild Theater production of Dance on a Country Grave, Kelly Hamilton’s musical version of Thomas Hardy’s The Return of the Native. In 1978 he played the role of Bruce Granit, a matinée idol caricature, in Harold Prince’s On the Twentieth Century, for which he won his first Tony Award. In 1981, Kline appeared with rock diva Linda Ronstadt and singer Rex Smith in the New York Shakespeare Festival’s Central Park production of The Pirates of Penzance, winning another Tony Award for Best Leading Actor in a Musical, for his comically dashing portrayal of the Pirate King. In 1983, he played the role in a film version of the musical, also with Ronstadt, Smith and Angela Lansbury, which had a limited theatrical release.

In the ensuing years, Kline appeared many times in New York Shakespeare Festival productions of Shakespeare, including starring roles in Richard III, Much Ado About Nothing, Henry V, two productions of Hamlet (one of which he also directed) and a Tony-nominated Falstaff in a production that combined the two parts of Henry IV.

Dubbed “the American Olivier” by New York Times theater critic Frank Rich for his stage acting, Kline finally ventured into film in 1982 in Alan J. Pakula’s Sophie’s Choice. He won the coveted role of the tormented and mercurial Nathan opposite Meryl Streep. Streep won an Academy Award for her performance in the film. Kline was nominated for a Golden Globe and BAFTA Award for best debut performance.

During the 1980s and early 1990s, Kline made several films with director Lawrence Kasdan, including The Big Chill, Silverado, Grand Canyon, I Love You to Death, and French Kiss. He played Donald Woods in Richard Attenborough’s Cry Freedom opposite Denzel Washington about the friendship between Activist Stephen Biko and editor Donald Woods. In 1989, Kline won an Academy Award for Best Supporting Actor for his role in the British comedy A Fish Called Wanda, in which he played a painfully inept American ex-CIA thug opposite John Cleese’s genteel British barrister and Jamie Lee Curtis’ femme fatale/con woman. In 2000, the American Film Institute ranked the film twenty-first on AFI’s 100 Years… 100 Laughs.

Though he has been offered many roles that could have boosted him to box-office stardom, Kline has kept a wary distance from the Hollywood star-making machine. He developed a reputation for picking parts with discrimination (such as strong roles in Grand Canyon and Life as a House), leading to the industry nickname “Kevin Decline”. Other awards have included Drama Desk Awards, Golden Globe awards, a Gotham Award, a Hasty Pudding Theatricals Man of the Year Award, and a St. Louis International Film Festival Lifetime Achievement Award. He was inducted in the American Theatre Hall of Fame in 2003. He also has a star on the St. Louis Walk of Fame.

Film reviewers have widely praised his talent. Newsday said Kline “has proved himself to be one of the most talented and versatile American actors of his generation.”

He played the title role in King Lear at the Public Theater, and took the lead role in a Broadway production of Cyrano de Bergerac opposite Jennifer Garner. That production was forced to close temporarily after only 11 performances as a result of the Broadway stagehands’ strike, but subsequently reopened. Cyrano was filmed in 2008 and aired as part of PBS’s Great Performances series in January 2009. In January 2008, Kline won a Screen Actors Guild award for his portrayal of Jaques in Kenneth Branagh’s film As You Like It, adapted from Shakespeare’s play. The film premiered theatrically in 2006 in Europe. It bypassed theatres and was sent straight to HBO in the U.S. Kline’s film The Conspirator premiered during the Toronto International Film Festival in 2010 and was described as an “old fashioned historical thriller”. It was well received by most critics. Kline also starred in the 2012 comedy Darling Companion alongside Diane Keaton.

In December 2004 Kline became the 2,272nd recipient of a star on Hollywood Walk of Fame, located at 7000 Hollywood Boulevard. 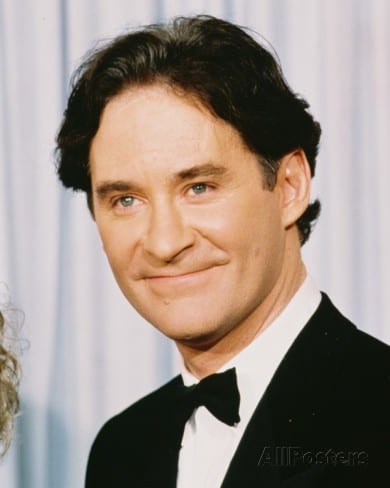 Kline married actress Phoebe Cates in 1989. The couple live in New York City and they have two children, including a daughter, Greta, a musician currently performing as Frankie Cosmos. After his son, Owen, was diagnosed with juvenile diabetes, Kline became active with the Juvenile Diabetes Research Foundation. In November 2004, he was presented with the JDRF’s Humanitarian of the Year award by Meryl Streep for his volunteer efforts on behalf of the organization.

The Kevin Kline Awards honor theatre professionals in St. Louis in a wide array of categories, which include best actor and actress, set design, choreography, and original play. The first awards ceremony took place on March 20, 2006.